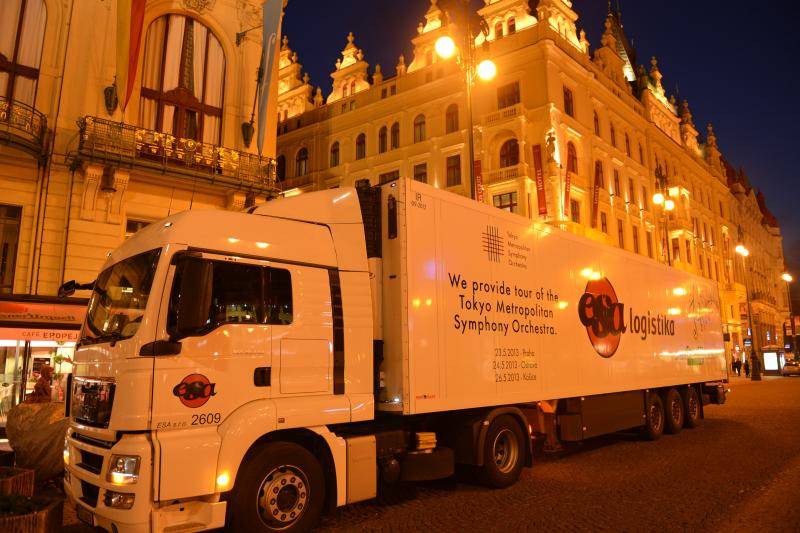 The Hitachi Transport System Group authorized us as the provider of logistic services for Central and Eastern Europe, to ensure the logistics service for the tour of the Tokyo Metropolitan Symphony Orchestra. The TMSO visited the Czech Republic and the Slovak Republic for a series of three concerts in Prague 23.5.2013, in Ostrava 24.5.2013 and in Košice on 26.5.2013. ESA was there from arrival and ensured road transport to the locations of the concerts, and the loading and unloading of TMSO equipment.
The transport of musical instruments, as very fragile goods, meant taking extraordinary measures in addition to security measures. First of all, this concerned security which included musical instrument insurance. Each instrument was placed into a special transport box, and loading was always done under the visual supervision of TMSO employees, the boxes were only very carefully manually handled, and the transport area in the vehicle had to keep a constant temperature within the range 25°C to 27°C. The route of the vehicle was precisely planned in advance, including the selection of safe places for parking.
During transport from Václav Havel Airport to Obecny dom in Prague, the assistance of the CR Police was needed, who had to stop the traffic to enable the vehicle to enter from the opposite direction directly in front of Obecní dům.
As the whole event passed without any problem and TMSO greatly appreciated the quality of ESA logistika services, it can be expected that in 2015 ESA logistika will once again be the provider for TMSO for the tour currently planned to run throughout the whole of Europe to celebrate its 50th anniversary.

We use cookies to ensure you get the best experience on our website. If you continue to browse our site, we assume that you consent to the use of cookies.I agreeNoPrivacy policy
Revoke cookies